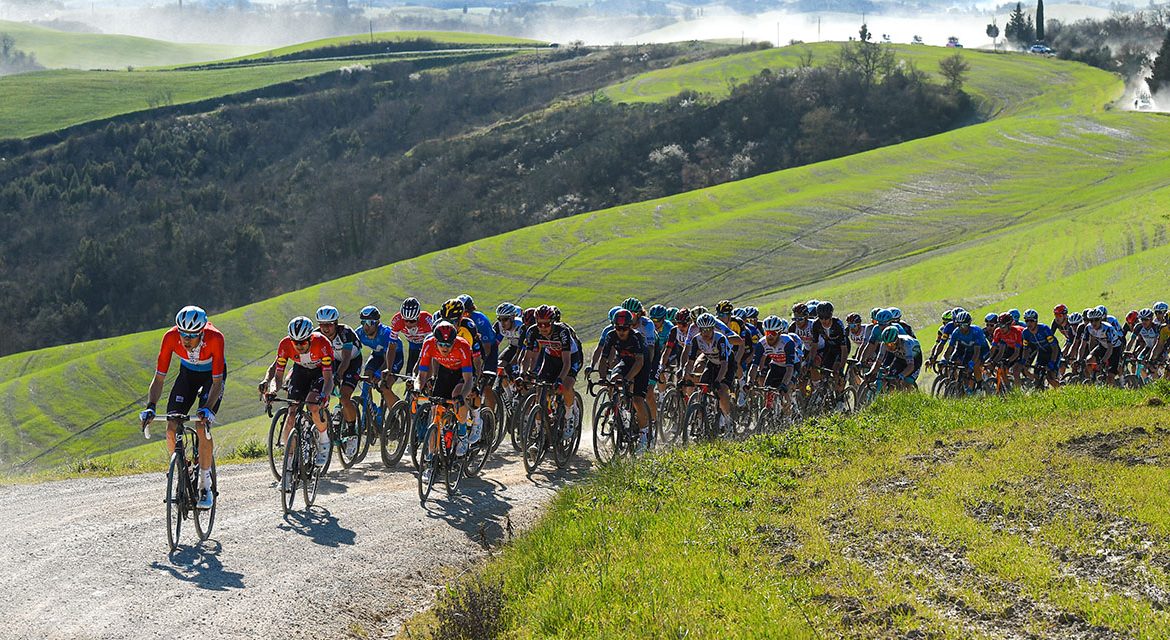 The 16th edition of the Strade Bianche is about to start, the appointment is for March 5th, 2022.
We tell you a little about this unique race on the Italian scene and beyond.
For the uninitiated, the first two editions had a different name ‘Monte Paschi Eroica, but, given the peculiarity of the roads traveled, in 2009 it changed its name to’ Monte Paschi Strade Bianche ‘to then arrive at the definitive Strade Bianche in 2012.
Since 2015, a parallel women’s race has been established, which takes place on the same day as the men’s one.
2017 was the year of the consecration of the Strade Bianche with the entry into the World Tour where, among others, the Milan-Sanremo and the Giro d’Italia were already present.

The path is very rough and undulating, there are no long climbs but on the dirt roads there are more or less steep tears.
Of the 184 km to cover, 63 km are on dirt roads divided into 11 sectors.

The race starts from Siena, more precisely from the Medici Fortress of the city, to then move towards the Val di Merse passing through Sovicille, San Rocco a Pilli and Murlo.
From Murlo you arrive in Montalcino, one of the most famous villages in Tuscany also thanks to Brunello, and then enter the Crete Senesi: Torrenieri, Buonconvento, Monteroni d’Arbia and finally Asciano.
From Asciano we leave for Siena passing first through the southern part of Chianti with a stop in Castelnuovo Berardenga. The arrival is expected in the wonderful Piazza del Campo.

The first real roughness of the race is found in the 2nd sector, just before Radi, with a short slightly downhill stretch and then a long uphill stretch at times with gradients over 10%.
5th and 6th sector, after Torrenieri, are among the most demanding, undulating, very nervous and with many curves and ups and downs.
The 8th sector begins at Ponte del Garbo in Asciano and is the most demanding, mainly uphill and characterized by significant ups and downs, among which we cannot fail to mention those near Monte Sante Marie which abruptly reach both uphill and downhill slopes very high.
Even the 9th sector, after Monteaperti, puts to the test, despite being only 800 m long, the participants in the race find themselves in front of a tear with double-digit slopes.
The last two sectors before arriving in Siena, shorter than 8 °, reach gradients of up to 15-18%.
Although from here onwards the route takes place only on asphalt the difficulties are not over, once you have passed the Porta di Fontebranda in Siena the paved pavement begins with about 400m with a 10% gradient, and then ends with slight descents to Piazza del Campo.

What can I say, we will not miss a minute of this fantastic race, and you?

BIKE TO THE FUTURE 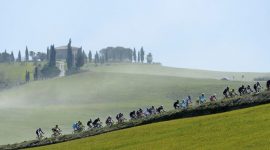 BIKE TO THE FUTURE

Bike To The Future was born in Asciano, in the heart of the Crete Senesi, to offer visitors to our territory

Become a part of our community!
Registration complete. Please check your email.
Lost your password?

Recover your password
Password reset email has been sent.
The email could not be sent. Possible reason: your host may have disabled the mail function.
Log in
×
We use cookies on our website to give you the most relevant experience by remembering your preferences and repeat visits. By clicking “Accept All”, you consent to the use of ALL the cookies. However, you may visit "Cookie Settings" to provide a controlled consent.
Cookie SettingsAccept All
Manage consent

This website uses cookies to improve your experience while you navigate through the website. Out of these, the cookies that are categorized as necessary are stored on your browser as they are essential for the working of basic functionalities of the website. We also use third-party cookies that help us analyze and understand how you use this website. These cookies will be stored in your browser only with your consent. You also have the option to opt-out of these cookies. But opting out of some of these cookies may affect your browsing experience.
SAVE & ACCEPT